I may be a little late on this but, did you know that there are several companies out there selling fabric you can print on?  I posted a picture of C. Jenkins Miracle Fabric Sheets because it was one of the few printable cotton sheet products that I found, that had examples of use over the web (see a little lower) and were also washable after printing.

Here are two pictures I found of Miracle Fabric used on the Craft Chi blog.

A customized table cloth and

a pillow.
The only thing I can see there being a problem with is COLOR.  If you've ever tried printing a colored image from an inkjet printer on matte paper, you know exactly what I'm talking about.  Inkjets work best with semi-gloss to glossy paper and anything else just looks flat and dull.  So just to be on the safe side, I wouldn't print colored photographs if I were you.  Things with flat colors and contrasts would probably work best.  The possibilities are endless!

Check out the sites and blogs below for other possible uses for fabrics:

P.S. I put my blog url in to Wordle and got this: 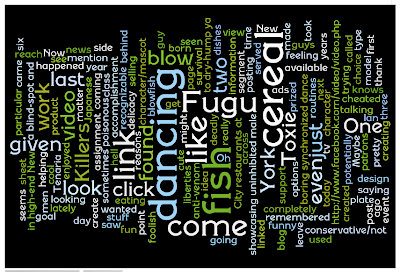 P.P. I'd like to thank Tenaria, Danny, Ian, and Janet for helping me meet 60% of my sponsorship goal for the Walk MS event happening April 19, 2009 in New York City.

I would like to thank Ian and Tenaria for helping me reach 35% of my support goal!  For more information on the event or why I'm doing it click on the link below.
click me
at 9:27 AM No comments: 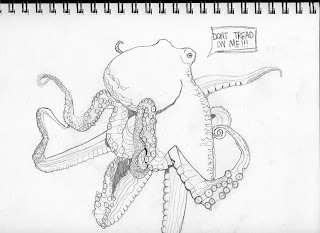 I found these today.  They are all work I did for a class last year. 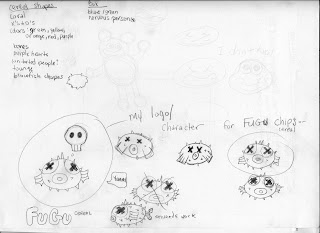 The idea for Fugu cereal came after I saw a news segment saying that Fugu (a prized sometimes poisonous Japanese delicacy made from a particular type of blow fish) was going to be served in high-end New York City restaurants at $300 a plate.  The selling point for these potentially deadly dishes (no anti-venom available here in New York,) was that patrons would have a feeling of accomplishment and survival after eating.  So when given an assignment to come up with a character/mascot for a product, Toxie was born.  These (next) are three out of six ads I created. 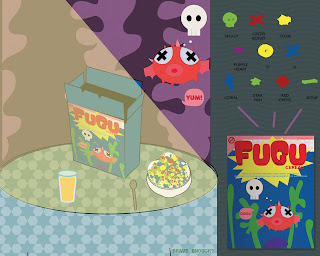 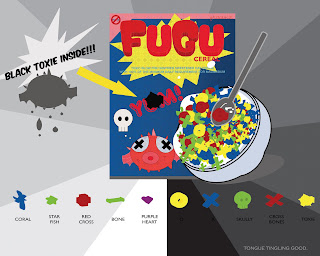 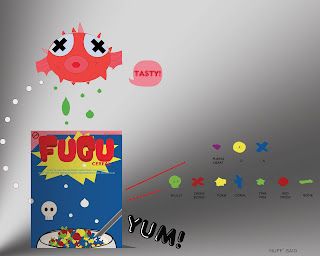 I've come across a blog page lately called Cereal Killers (linked below) and after looking at the work there, my stuff seems pretty conservative/not as funny.  Maybe, when given the time, I'll come up with Fugu Cereal 2.0? Who knows? 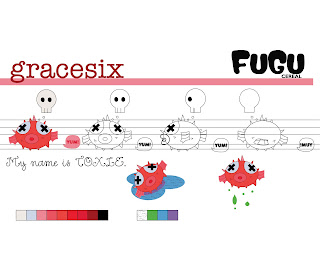 This is the "model sheet" I had to create for Toxie.  The side view of the fish is completely cheated.  When creating the character, I took some liberties with it's design for two reasons.  One, that it be recognizable as a blowfish and two, have you seen what these fish really look like?  Not very cute.  I'll link below.
Cereal Killers
Blow Fish
at 12:03 AM No comments:

I found this video the other day.  Isn't it cool?
Oh, and the video in the last post wasn't my first choice in showcasing uninhibited male dancing.  The one I wanted didn't leave me any options of posting it here, so I link to it below.

Email ThisBlogThis!Share to TwitterShare to FacebookShare to Pinterest
Labels: dancing, findings of the web, links, video

dancing on the brain

I just remembered that guys used to like dancing, even a few years ago!  Now the most you'll get is some guy coming at you from a blind-spot and trying to dry-hump ya' from behind.  Don't even mention those boring synchronized dance routines that you see on tv to me.  I'm talking about when men enjoyed dancing just for the hell of it.  Dancing for fun no matter how foolish they might look.  What happened?
at 11:36 PM No comments: